Welcome to the new and improved world of modern television! Almost from the time the very first TV arrived in the very first American home, TV was surrounded by the promise of better technology, better entertainment, and better living. And who deserved this promise more than the generation who had lived through the Great Depression and fought World War II? At first, it didn't really matter that only a few TV stations broadcast only a very few shows for a few hours each week. If you were one of the lucky families who could afford to have your own television set, you were living a dream come true.

With Dad home from the War, Mom home from her job, and babies arriving faster than ever before in history, the time was right for looking forward and looking forward included gazing at a new TV screen. The whole family gathered together to watch Milton Berle on The Texaco Star Theater, and the neighbors often joined the fun too. No wonder, within months, the great Vaudeville star was known nationally as Uncle Miltie. He was part of the family.

Within just a few years, TV viewers would have far more choices in what to watch. By the early 1950s you could tune in to drama, situation comedies, variety shows, sports events, movies, and game shows. But, in spite of limited choices at the beginning of its history, TV was less about what was on than it was about its magic pictures and sound being broadcast into our homes.

The first TV sets were behemoths! Huge cabinets housed tiny "peep-show" sized screens of perhaps 10 inches, measured diagonally. Variable reception and imprecise controls made tuning in the pictures challenging. The family gathered around to peer in wonder at the new marvel, but they all had to sit pretty close to get a good view.

By 1950 there were TV broadcasting stations in 25 cities across the United States. Forecasts called for stations in 43 cities by the end of that same year. Once this phenomenon started to roll, there was simply no stopping it.

Of course, with such rapid growth, TV sets themselves just got better and better! By the early 1950s viewers had lots of choices when buying TV sets. Screens grew larger and prices came down so that by the early 1950s you could buy a TV set with a 21-inch screen for the price it cost to purchase a 17-inch set just a few years before. By the middle of the decade, remote control devices allowed you to control your set from the comfort of your recliner without ever missing a moment of fun.

Early TVs represented more than just a new toy. They were also designed to be an important part of the décor of any room. TVs came in beautiful wood cabinets of every hue and style, from Danish modern to French Provincial. No need to let the latest technology clash with your decorating tastes. Many of these consoles came complete with doors that let you close off the screen when you weren't watching. The consoles alone made lovely additions to any family's living room, and made a clear statement of where this family stood on its road to achieving the American Dream.

With these technological advances, lower priced sets, and more stations broadcasting, TV and its audience were growing up together. Throughout the 1950s programming changed to reflect this growth. Early TV shows were meant to be viewed by the whole family together, and they were. It didn't matter if the kids didn't always get Uncle Miltie's jokes. The good feelings that came from sharing the wonder of TV together made up for what they missed. Mom and Dad weren't too sophisticated to enjoy an episode of Kukla, Fran, and Ollie with the little ones. The thrill of watching TV and enjoying the successful dream-come-true life it brought to them was satisfaction enough for anyone.

But as TV viewing became more a part of everyday life, family members began to identify and gravitate toward their favorite shows, and stations began to offer shows intended for specific audiences. The Texaco Star Theater fell out of favor as stations spread across the country. Berle's fast-paced, slapstick, madcap humor had an urban edge that simply didn't play as well with people in the middle of the country as it did with those in the urban centers who once made up the majority of TV viewers. No matter, more and better programming was just around the corner waiting to offer something for everyone. Howdy Doody took his place as the favorite character of a whole generation of children who waited for Mom to fix supper and Dad to get home from work by spending their afternoons with their favorite puppets. Dad could settle in after a long day to an episode of The Untouchables, and Mom was almost certain to be watching her favorite soap opera Search for Tomorrow, while she ironed the family's clean laundry. Yes, as TV grew and improved it was able to provide something for each member of the family. And the promise was that it would only continue to get better. 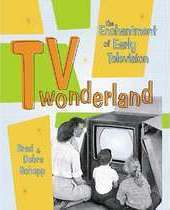 Kick Ass Social Commerce for E-preneurs: It’s Not About Likes--It’s About Sales
Amazon TopSeller Secrets
Top tips for success as an Amazon seller from the pros themselves.

How to Find a Job on LinkedIn, Facebook, Twitter, Google+
How to locate jobs, as well as gather information for the one you have, using social media.

The Online Genealogy Handbook
Learn where you came from to better understand who you are.

How eBay Really Works
The inside scoop on getting the most from eBay, for both buyers and sellers alike! Short on boring descriptions, long on snappy stories, tips, and fun facts.

TV Wonderland: The Enchantment of Early Television
Facts and figures about TV through the decades, with fabulous full-color print ads.

The Telecommuter's Handbook: How to Earn a Living Without Going to the Office
Break Free from the Office Prison!
Loading…}